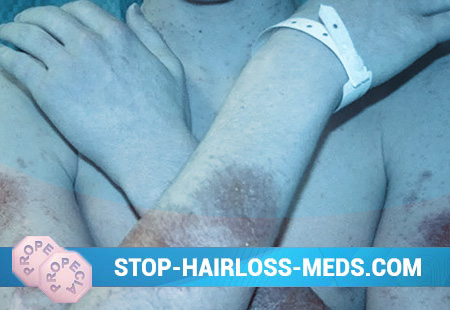 It develops as a result of direct exposure to the patient’s skin of various environmental factors, which include: chemical (strong solutions of acids and alkalis), physical (elevated and lowered ambient temperatures, various types of radiation, mechanical effects on the skin, electric current, etc.) etc.), biological (various infectious processes).

According to the modern classification, it is customary to distinguish two main types of contact dermatitis: simple and allergic. Let’s consider each of these types separately in more detail.

Develop in response to exposure to the skin of the above harmful factors. It is characterized by the development of the focus of inflammation, which appears directly in the place where this or that factor acted. Moreover, the boundaries of the inflammatory reaction on the skin surprisingly clearly coincide with the boundaries of these effects. The severity of the inflammatory process is also in very close connection with factors such as the intensity of the previous irritation, its duration. A certain role also belongs to the individual properties of the skin of the patient and his body as a whole. The entire course of the disease in general can be divided into 3 periods, which follow one after the other:

It should be noted that the above burns and frostbite also apply to varieties of contact dermatitis. Another characteristic form of simple dermatitis is attrition, which develops most often as a result of wearing uncomfortable small shoes. A characteristic feature of simple dermatitis is that, unlike infectious skin lesions, it is never preceded by a latent period. The general condition of the body is also never disturbed. As an exception, only burns and frostbite of a large area and depth can be noted.

Attrition
As noted above, it develops with constant pressure on the skin with bandages, poorly fitting shoes, uncomfortable and too small size. Damage to the skin can also be caused by the action of folds of clothing, footcloths. As a result, an inflammatory process develops on its surface. On the part of the patient’s body, there may be such predisposing factors as increased sweating of the skin, flat feet.

After the skin lesions that have occurred with the above mechanical factors, red spots (the first stage of simple dermatitis), areas of swelling appear on it at the very beginning. If at this stage the irritation is stopped, then an independent recovery occurs. If skin irritation continues, then other elements appear on it: vesicles, large blisters, superficial skin defects and even deep ulcers. A very common and most striking variety of the disease is the appearance on the palms of corns unaccustomed to physical work of people, in fact they are bubbles containing a transparent aqueous liquid inside. These are the so-called water corns.

Intertrigo
This is a type of simple dermatitis that develops in patients who have constant friction of one area of ​​the skin against another. Most often this happens in those places where there are contacting surfaces: under the mammary glands in women, in the area of ​​inguinal folds, flexion surfaces of joints, etc. The disease is especially common for overweight women and infants in the absence of proper care for their skin. In the vast majority of patients, the disease is certainly accompanied by various infectious complications of a bacterial or fungal nature.

Dermatitis Leiner
It develops mainly in young children, especially infants. It is the outcome of an unfavorable course of diaper rash, when there is no proper care for children’s skin. Usually, the process initially develops in the form of diaper rash of the intergluteal fold, but subsequently it spreads over rather large areas. The skin here acquires a bright red color. Then, against the background of such spots, other skin elements also appear: scales of a grayish-white or yellowish color, oily, due to detachment of the upper layers of the skin.

In the area of ​​the scalp during examination, you can find a very large number of thick crusts that lie in layers on top of each other. In a certain group of patients, Leiner’s disease develops against the background of infectious diseases, most often in the form of purulent foci, such as inflammation of the lungs, ear, diarrhea, etc. In such cases, the signs of infection itself will be predominant and most important, and dermatitis itself fades into the background. Usually, the prognosis for diaper rash is quite favorable. This does not apply to severe cases when, against the background of severe dehydration, the death of the patient is possible.

Intertrigo
The very first signs of diaper rash are spots of redness on the skin, which have fairly clear, but irregular and uneven outlines. Against this background, in the future, in the places of lesions, small bubbles and pustules appear. Their occurrence indicates that microbial pathogens have joined. In some cases, diaper rash can develop as a result of population of the patient’s skin with yeast fungi.

Other factors contributing to the development of diaper rash in a patient include high ambient temperature, increased sweating of the skin, insufficient patient care for the skin, especially in the folds, the presence of seborrhea, especially its oily form, not enough good drainage of the skin after showering or bath. When such patients are admitted to the clinic, they most often complain to the doctor about constant discomfort in the form of itching and burning in places of skin lesions.

The treatment of simple dermatitis in most cases consists in the fact that it is necessary to remove irritating factors from the patient’s life. If this condition is met, the disease can go away on its own, then any medical measures are not required in the future. Throughout the rest of his life, the patient should avoid contact with the allergens that caused the disease. It should be remembered that over time the range of such allergens for the patient can expand. Therefore, when any manifestations of allergies appear, you must immediately look for the cause of them and eliminate them as soon as possible. If, nevertheless, contact is inevitable, then it is necessary to take anti-allergic drugs immediately in front of him, which are in a wide range on the modern market.

If strong acid or alkali solutions get on the skin, an elementary measure of help is to immediately wash them off with ordinary tap water.

Drug therapy of dermatitis mainly consists of local measures aimed at treating the skin lesion. If the patient’s skin has very pronounced redness spots with areas of edema, lotions with medications are prescribed, which are chosen by the attending physician. Ointments are also widely used, which include preparations of hormones of the adrenal cortex.

During the vesiculo-bullous stage of the disease, all bubbles present on the patient’s body must be opened, however, it is not recommended to remove the tire, it is impregnated with disinfectant solutions and placed in place. Currently, in such cases, epithelizing ointments are used more and more widely.

With the appearance of areas of skin necrosis, such a patient must certainly be hospitalized in a hospital.

When scuffed, it is recommended to lubricate the skin at the sites of lesion foci with pastes containing zinc and its compounds in its composition. Bubbles can not be opened, but punctured with a pre-sanitized needle, you only need to completely remove their contents.

For diaper rash, various zinc pastes are also recommended. In addition, general patient therapy is prescribed, which provides for the appointment of vitamins, especially group B, intravenous preparations of antibodies that increase the body’s immune forces, and antibiotic therapy is indicated for complications.

Prevention of simple dermatitis with scuffs is the treatment of excessive sweating in the legs. For these purposes, baths with infusion of oak bark, wiping the skin of the feet with special solutions, the use of powders, the use of deodorants for the feet are used. In this regard, thorough hygienic foot care and wearing shoes of the appropriate size are very important; for the military – the correct winding of footcloths. If only the initial signs of attrition appear, treatment should be started immediately. This leads to a faster recovery.

Preventive measures for diaper rash and Leiner’s disease mainly include hygiene measures for the care of the skin of newborns and infants. Their daily bathing, skin lubrication 1-2 times a day with special cosmetics are necessary. Skin talcum powder is also used, uncoupling of constantly rubbing surfaces with a piece of gauze. All children who have undergone a simple form of dermatitis, in the future should be under some constant supervision of a dermatologist in a polyclinic or dispensary according to their place of residence.